Welcome to our future... 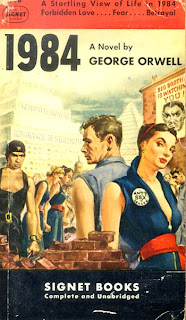 "Simon Conway - the human time machine. We're headed to a place I've already lived through!" If you've listened to me on the air a few times, then you will probably have heard me say that. But what I'm about to tell you, I have not lived through. It does however, come from a place which tends to be a future predictor of what is coming here.

Right now just two in five of the UK population believe that global warming is caused by human activity.

Everyone would be issued with a unique number - "I am not a number - I am a MAN" (if you can tell me where that comes from you win the prize of being really hip!) - and you would have to give your number (the Nazis did something with numbers too - I forget right now) when you were buying stuff that contributes to your carbon footprint. Now of course, this is Government so although it may start off as gas and airline tickets, you know they will see the tax potential and eventually include candy because of course candy takes energy to make and therefore increases your footprint! ARRRGGHHHHHH!!!!!!!

Somebody shoot me now!!

The proposal further suggests that just like with your bank account, you are going to be sent a monthly statement (errr...did anyone figure out that takes trees and stamps and gas to deliver?) to "help people keep track of what they are using" according the the UK Telegraph. And here's the kicker. If your account hits zero, then you have to pay to get more credits.

But perhaps the most scary and Orwellian stuff is this. And of course, there has to be a bad guy right? Listen to this OFFICIAL Government quote.

A spokesman for the Agency said the following: "A lot of people who cycle will get money back. It will probably only be bankers and those with extravagant lifestyles who would lose out."

The scheme is part of - wait for it - Britain's "Green New Deal" - again, I am not joking.

It does have it's critics of course. One of those evil Bankers weighed in with the following. She is an economist with the Arbuthnot Banking Group and she told the UK Daily Mail: "This is all about control of the individual and you begin to wonder whether this is what the green agenda has always been about. It is Orwellian. This will be an enormous tax on business."

Simon Conway is the two-time winner of the FIVE STAR Best in Client Satisfaction for Real Estate Agents in the Orlando area.

Please give me a call if you have questions about the Central Florida real estate market.  You can reach me on 407 876 8200.  Also visit my web site at www.simonconway.net or www.move2orlando.net

The Bible talks about the number as well. Whan I was young everyone talked about how ridiculous it would be for folks to take a number in there forehead or hand and whatever. But with today's identity theft, it is so real and will come to fruitition sooner than we thought. Also in my days they thought that men on the moon was the biggest joke of the day.

I don't think Orwell wrote this as a manual to follow but the elite is doing it anyway.

Posted by Goodbye Active Rain, Out of Real Estate over 10 years ago

There's one exception to this strict control; the elites. The libs who annoint themselves "elite" will continue to burn 10-20 times more energy than any of us commoners.

Posted by Jon Budish (Resident Realty) over 10 years ago